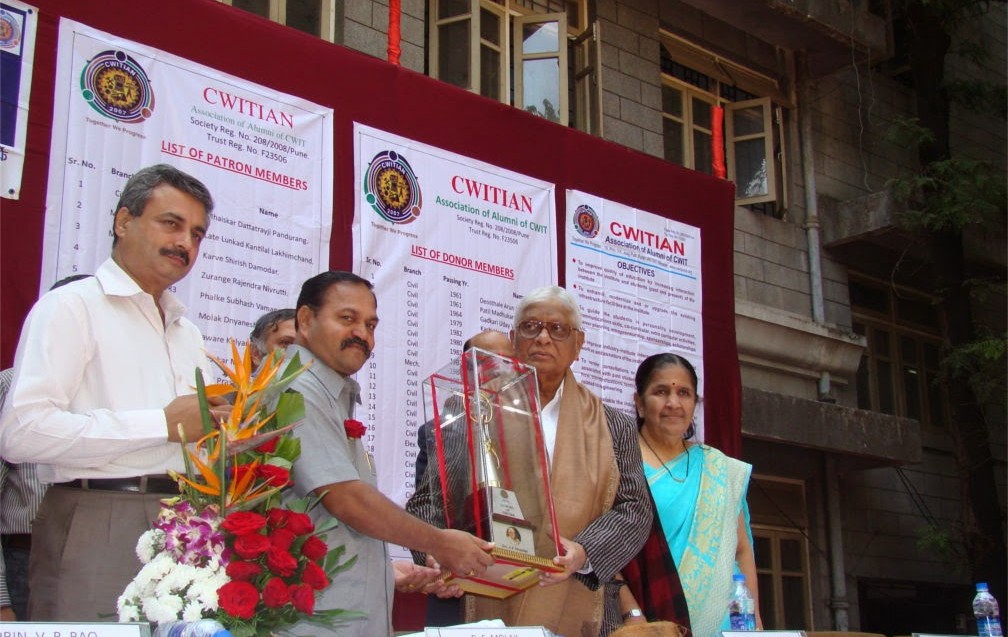 Our CWIT’s first ‘Diamond’ and CWIT Pune’s Civil Engineer Department’s first student and the first donor with a very charitable personality. Building roads and maintaining them were the main fields in which IRB work, was founded by “Shri. Dattatray Pandurang Mhaiskar” who succumbed on 3rd January 2018 due to some minor disease. This incident caused all the CWITians in deep grief, leaving us with a feeling of loss of a fatherly figure of our family.

Respected DP was born to a railway officer “Shri. Pandurang Anna and Mrs. Prabhavati Mhaiskar”. After finishing his primary, secondary, and higher education in Dombivali and Lonavala, he came to Pune in 1960 to our “Cusrow Wadia Institute of Technology”. He pursued his diploma in Civil Engineer from CWIT. For the first 15 days of his career, respected DP worked for town planning department of Maharashtra. Further, he served for Quality Control Department for road development sector in Mumbai for 2 years. Respected DP worked for the next 15 years (1962-1977) as an engineer in a private road construction company named “M/s. Shah Constructions”. Having a liking for innovative  things, he lost interest in his job. After giving his resignation, he selected 5 participants in 1977 and with only Rs. 3,00,000.00 (Rs. Three Lacks), he established “Ideal Road Builders P. Ltd.,”. At the beginning, he worked as a road contractor in Mumbai Municipality. He was a perfectionist. He got to the top of his profession in a very short period of time because he loved to impart his vast knowledge of road construction, which includes basics of construction like bricks, concrete, soil etc.

Due to respected DP’s huge contribution, IRB came into the limelight in a very short period of time. Good quality and durability of construction, earned him a lot of tenders from the Government sector of Maharashtra. During the period of alliance government, they constructed the first phase of State Highway from Thane to Bhiwandi. This structure had a great influence of “BOT” means “Built, Operate and Transfer”. After this the concept of “BOT” was used throughout the  State of Maharashtra. Keeping the project of old Khandala Ghat aside, he took up the job of toll exaction on the newly constructed Mumbai Expressway. Due to good quality construction, IRB’s business flourished and they got proposal from all over the world. He was the first businessman to lend Rs. 918 Cr. to MSRDC for it’s development. Due to his quality construction, he was leading in his profession. IRB constructed a very strong road named Manpada in Dombivali is still remembered by everyone. Various ideas like construction of roads, BOT’s policies and toll exaction came into existence due to IRB. Exaction of taxes privately was successfully executed in Amravati by him. The foreign trend of making  available all the products in one mega store was introduced in Dombivali in 1983 and was named as “Kranti Departmental Stores”.

Honorable DP was an ideal example who proved that if a person is perseverant and courageous, then they can reached great heights. Even after handing over his business to the next generation he kept track of all the construction practices that were carried out in his absence.

Though his simple living and introvert nature kept him away from social activities, he had a close connections with sports, education and culture. He made all the important provisions in the Dombivali Gymkhana to encourage a healthy society. He was the backbone of the Gymkhana. He got done the construction of various labs & libraries in “K. V. Pendhari School ” in Dombivali. In the same way he got constructed the stage and the maintenance of the lawn in CWIT, Pune along with the help of CWITIANS. The stage was named as “Hon. D. P. Mhaiskar recreation Center” by the main organisation “Modern Education Society, Pune” showing there heartfelt gratitude towards him. He had huge contribution in the foundation of “Kalyan Singing Society”.

Respected DP founded the Mhaiskar Foundation to carry out various social activities. Through this foundation, he encourage various activities in the fields of sports and art.

He help many needy people without a second though. Even though he owned a lot of cars, he still travelled a lot by local trains. He was so down to earth that he would parked his car near the Mumbra railway station and then travel by local transportation systems.

CWIT and CWITIAN’s have lost the best and eldest as well as respectful, timeless and skilled member of our huge family. We wish him peace from the bottom our hearts and may god bless his soul.